Where to Watch: Netflix + OnDemand

As with Fleabag and Good Omens before it, Schitt’s Creek is one of those recommendations that you probably don’t need if you’re reading this blog. It feels like half the internet is obsessed with the show and will bring it up all the time. Turns out, it’s for a good reason. While the first few episodes are a little abrasive (and I get why many quit during them), throughout the second season, you start to see what this show will become. The Rose family settles in. This isn’t the life they planned but gradually it becomes the one they will accept, if not fully embrace until later. If the early episodes aren’t appealing at all, the second season finale would make a good re-entry point to the show. The third season is full of growth and love and blossoms into the show that makes everyone rave about it and it only continues from there. The main love story is full of that Mike Schur sweetness and connection that I love and I can’t think of another queer love story like it on television. You can’t help but fall in love with these characters with their occasionally myopic and privileged view of the world but who also continually become better as they open themselves up to the love they’d previously kept at a distance. It’s a beautiful journey, full of laughs and moments that were made for reaction gifs, and so worth a watch. 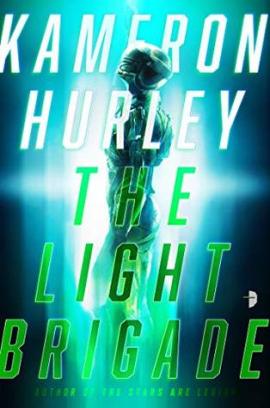 If you’re a fan of The Expanse (at least the show, I haven’t read the books yet), The Light Brigade will probably be right up your alley. Set in a world controlled by a small handful of corporations, we experience a war from the perspective of Dietz, a soldier who signed up wanting to do good after losing everyone they cared about in an event called The Brink. It’s dark and bloody, as wars are, and full of striking quotes about the dangers of a world increasingly controlled by corporations and the loss of freedom and the overt and covert ways those in power exert that power over those without it. The interview snippets between an unknown person set in an unknown time that are sprinkled throughout the story give us a glimpse into a future event that comes together beautifully in the end. I am a big fan of Hurley’s nonfiction book The Geek Feminist Revolution and you can see some of the ideas touched upon in that book elaborated on and made richer by our investment in this fictional world. She understands that fighting for something, that fighting for those we love, will always be stronger than the choices we make as a result of fear. She understands the power that we have to change the world, even if (or especially when) it means tearing down the systems that brought us to this particular future. It’s that hope and belief in something better than takes this beyond a dark war story and turns it into one of triumph and fortitude. It’s one of the best things I’ve read all year and one that will stay with me for a long time to come.